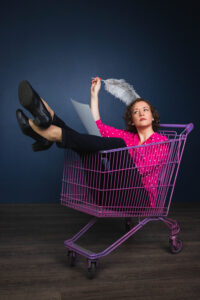 Rahel Otsa first met with improv in the first ever improv workshops in Estonia that were organized by Rednar Annus. The teachers there were from the Finnish improv theatre Stella Polaris. From 2009-2019 Rahel managed one of the first Estonian improv theatres - Jaa !mproteater, and since 2013 she has organized the international improv festival Tilt, which, unfortunately, is currently on hiatus due to circumstances. She's been running the improv studio (though under different organisations) since 2011. In addition, she has done workshops in Finland, Sweden, Russia, Belgium, Australia, Vietnam, Singapore, Nepal, China and New Zealand. She also conducts improv-based team trainings for companies.

As a teacher, it is important for Rahel that creativity goes hand in hand with the cooperation of the whole group and that learning new things and challenging oneself takes place in a safe environment. She enjoys touching stories, whether in the form of comedy or drama, and believes that well-told stories have the power to change the world.

Skip back to main navigation